Third graders battle with the Force of knowledge 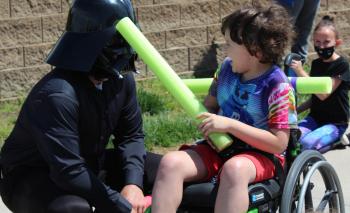 What began as a class activity to recapture student interest in learning has turned into a third grade galactic event at Chanute Elementary School.

Hannah Wolf said she first came up with the idea during her student teaching year. 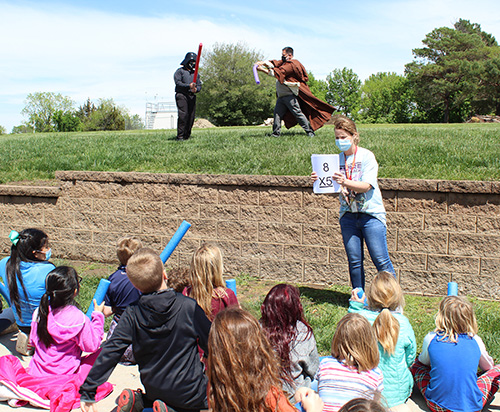 She had some boys in class who were difficult and she was “trying to find a way to draw them in, to reach them.”

What she did know was they were obsessed with Star Wars.

Wolf admitted she was more of a “Trekkie” than a Star Wars fan, but thought, “If I could do something to really excite them because they were so hard to reach,” she was willing to give it a try.

She saw a Facebook post about “May the Fourth Be with You,” the annual May 4th celebration by fans of George Lucas’ Star Wars films using its popular phrase, “May the Force be with you.”

“I spent all weekend making all the kids Jedi robes,” she said.

The timing was right. At the end of the year, the kids are starting to lose interest and focus, while teachers are going over all their grade level content for an end of year review.

“Why not lean into that,” Wolf asked, and use it as” a fun way to engage them.”

It’s since turned into an annual event, involving all the third grade classes. 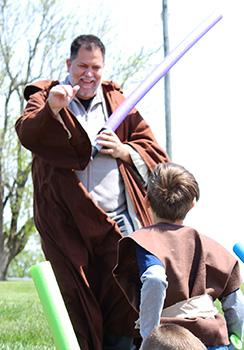 “We spent several days Jedi training, going over the traits of a Jedi, kindness, responsibility, acceptance of one’s self, and making sure we were doing something (personally) to strengthen the Force,” Wolf said.

They purchased $65 worth of pool noodles, cut them in half and supplied all the students with a lightsaber for the upcoming battle.

In class, the students spent all week reviewing what they’d learned in each subject, knowing they would use their knowledge to help defeat the forces of evil.

On the day of the battle, the third graders gathered behind the school where Principal Eric Hoops in his Darth Vader costume faced off with Assistant RMS Principal Chris Shields in his Master Jedi robe.

Teachers stood in front of their classes, taking turns giving their students multiplication problems to solve. With every one the class got right, the students weakened the strength of Darth Vader and the Force wins the battle.