CES students have safer place to land on school playgrounds 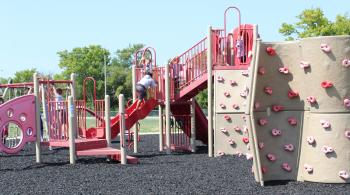 Students have a softer place to land when they fall or jump from the swings or monkey bars on the north and south sides of Chanute Elementary School. 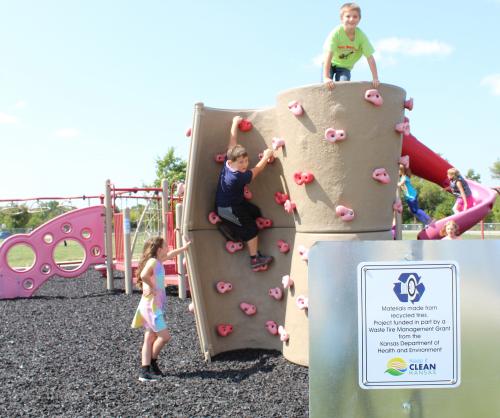 Over the summer the existing pea gravel was replaced with six-inches of rubber mulch recycled from used tires. Funds from a Kansas Waste Tire Management Grant Program paid for half the materials and delivery of 182,000 pounds of rubber pellets to Chanute, with the school district picking up the other half.

The grant was awarded by an advisory committee of the state Dept. of Health and Environment that reviews the competitive grants, recommends project selection and awards funding to applicants.

The district proposed to purchase rubber mulch for three playgrounds on the elementary campus at 500 Osa Martin Blvd. The playground that butts up against the south side of the school already had mulch but the district wanted to add two more inches of depth to it.

“The rubber mulch definitely makes it a safer surface for the kiddos to play on,” said CES Principal Eric Hoops. “I think it’s a better deal all the way around. It’s a safer playground when playing on the monkey bars in case they would happen to fall.”

Hoops said he doesn’t miss the pea gravel that would follow students into the school or fly to the sidewalks.

“When the mulch does get onto the sidewalk around the playground, it’s not as hazardous as the pea gravel on the sidewalk was, when students would happen to slide and fall,” he added.

The Kansas Legislature created a solid waste diversion program in 2004 and later allowed funds from the Waste Tire Fee Fund to be used towards the purchase of waste tire-derived products. The Waste Tire Fund generates income from a 25-cent excise tax on all new tires sold in Kansas. 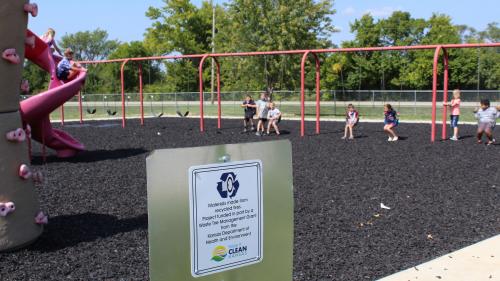