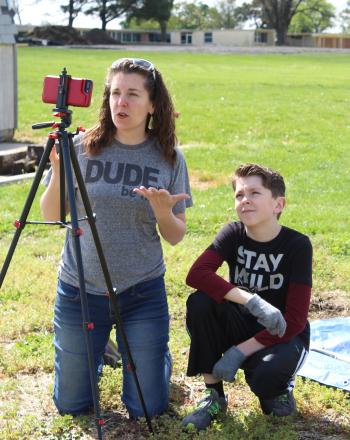 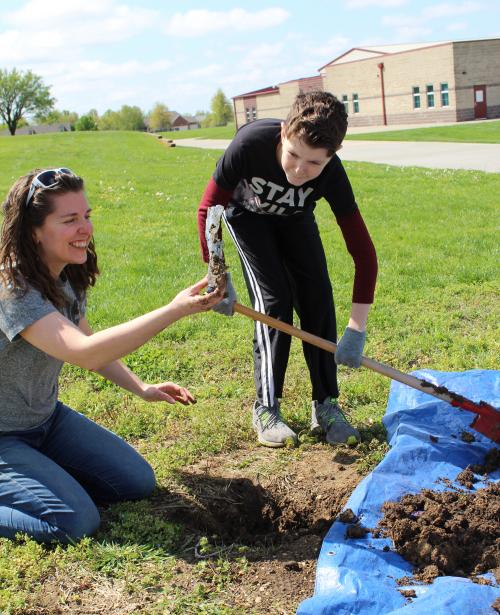 The first grade teacher sorted through clumps of dirt and clay last week to see what, if anything, survived being buried in the ground behind Chanute Elementary School last October.

Last fall Frese and her students talked about what happens to the trash they leave outside their house that goes to the landfill. Then they talked about trash in terms of organic being the kind that turns back into soil and inorganic which does not.

For an experiment, they were asked to contribute items they were curious about and put them inside a pumpkin that would be buried.

“It had been hollowed out and we filled it with different types of trash,” Frese said. The students contributed a popsicle stick, eraser, water bottle, scissors, candy wrapper, Lego, a Lego wrapped in tin foil, food carton, newspaper, banana peel, and shelled and unshelled pistachios.

“The intention was to dig it up on Earth Day,” she said, but it rained. So she and her son, Jacob, on shovel duty, videotaped themselves unearthing the burial site a day later.

The biggest surprise isn’t what happened to the items inside the pumpkin.

“Every year I have students who are absolutely positive that the pumpkin will still be there when I try to dig it up,” Frese said. It doesn’t occur tthem that the pumpkin may be the first to decompose.

This year, the digging revealed a few small pieces of pumpkin skin and a piece that may have been the stem, but no visible pumpkin 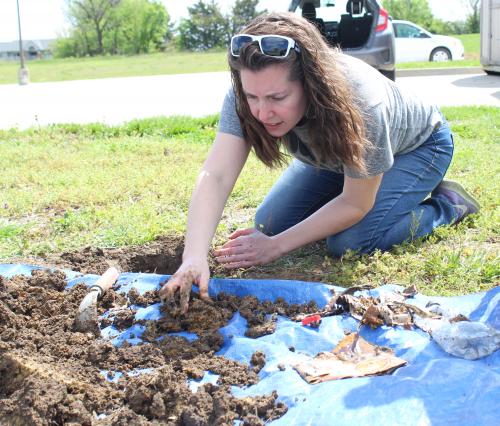 shape. Also missing was the Popsicle stick, banana, and there was no sign of the pistachios. A muddy, slimy nondescript mess was all that was left of some newspaper, except for a separate legible scrap.

“This is one of my favorite science projects to do with my first grade class,” Frese said. “They get so excited to see what their things will look like. (And) it encourages a great conversation about organic and inorganic items.”

In her video Frese talked with her students about how many things they throw away that will never decompose. She shows them a reusable water bottle and suggests using that instead of plastic bottles of water sold at stores that are thrown away.

To watch a video of Ms. Frese and Jacob digging up the pumpkin, click below.