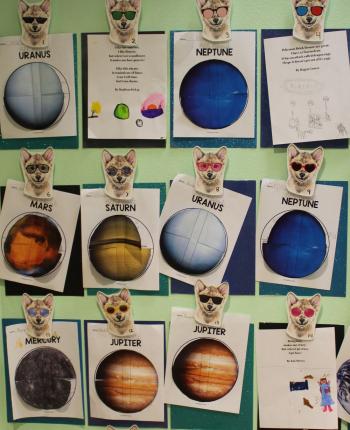 There was little doubt what facts and images Hannah Wolf’s third graders had been filling their brains with all week. Pictures of hand-drawn planets filled the wall next to the door, stars hung from the ceiling, and their own renditions of what the Hubble Telescope sees in space were taped to their desks. 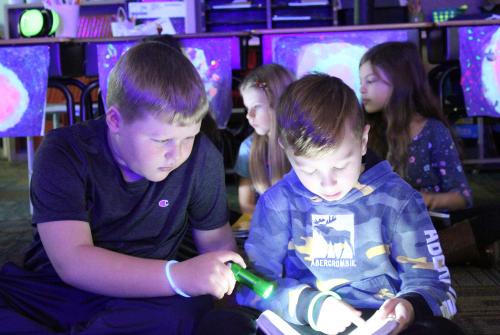 The students were exploring the "Earth and its Neighbors" in a unit about the solar system.

“It's one of my absolute favorite units,” Wolf said. “I feel like it really gets kids curious about the world and universe that they live in.”

The students read space-related articles from ReadWorks, an online resource of reading passages. Their task was to find the main idea in the articles and three key details of the text. Then they wrote those key ideas onto stars that they hung from the classroom ceiling.

Another project was choosing a planet to research. They also learned about text features and expository text. The class attached a large sheet of paper to the hallway wall and then added “cool facts that they have learned from expository texts in our classroom,” Wolf said.

“It's always fun to see how excited they get, and all the thoughts they have, and the questions that they come up with,” she added.

At the end of the week, the students read about the Hubble Telescope and other satellites that have gone into outer space and sent photos back to earth.

“We painted our own "hubble" pictures using neon colors so that we could feel like we were in outer space on our space day,” Wolf said. 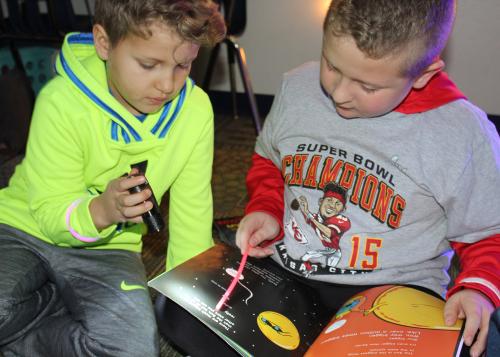 They ended the week by inviting Mrs. Coke’s second graders to their classroom to read with them.

With images from the Hubble Telescope playing across the Smartboard and the lights dimmed to resemble space, the students read to each other from the glow of a flashlight.

“The reading fun with Mrs. Coke's class was just a fun way to end the unit,” she said.