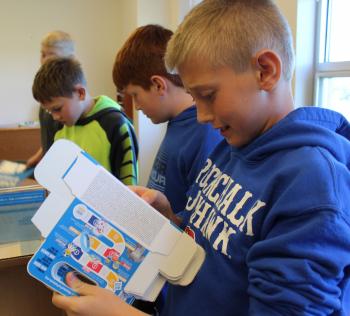 Learning how to run an efficient and successful campaign is one of the byproducts of serving on the Fifth Grade Leadership Team at Chanute Elementary School.

This year’s team members, under Assistant Principal Brooke Wire, are conducting a “Pennies for Patients” campaign this month. They helped with the kickoff assembly last week and planned incentives to encourage students to contribute to the cause. This week they’ve carried out the logistics of distributing materials to classrooms and will collect donations the next three Fridays. 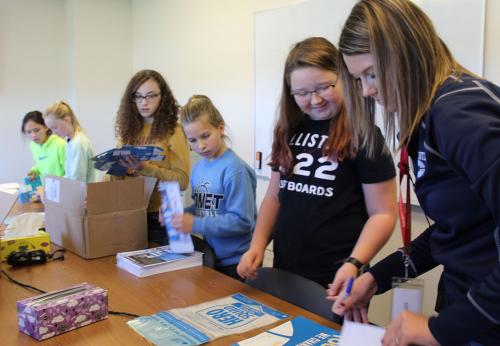 Pennies for Patients is a fundraiser for the Leukemia and Lymphoma Society, which is dedicated to finding cures for blood cancers. Through a couple short videos, the CES students were introduced to the society’s honored heroes, children who are affected by blood cancers.

“We like the cause,” said leadership team member Anni O’Dell. “And I think everyone wants to find a cure for cancer.”

The video pointed out that every hero fighting cancer needs a squad, a team of parents, nurses, doctors and friends working on their behalf.

CES is going to be that Squad for someone, and the leadership team is encouraging all their peers join with them.

“My mom works at the Cancer Center of Kansas at the Ashley Clinic,” he said.  “We just want to help kids, because it’s for the leukemia and lymphoma society.”

“Maybe with your funding for this, (doctors) can find a different way to cure it,” O’Dell added.

It was suggested that students could look for loose change while cleaning their rooms, do extra chores for family and friends, or come up with fundraising ideas of their own. 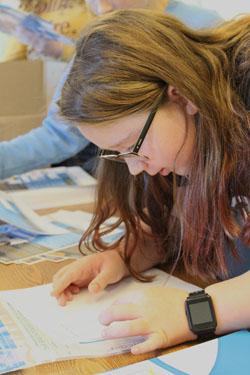 The Leadership team came up with incentives to encourage donations. At the end of week one, the class that raises the most money will get a snack party of preferred treats, and the second place class will get an extra recess.

At the end of week two, the top class will have a donut decorating party, and the second place class gets to eat lunch in their classroom with the principal of their choice.

The prize for the class that raises the most over the entire campaign, and the prize for reaching the  $3,000 goal hasn’t been decided, but not for lack of  ideas. One area where this leadership team excels is brainstorming.

The students have suggested a bowling party or a class trip for the class raising the most overall. Or maybe lawn mower racing, said another.