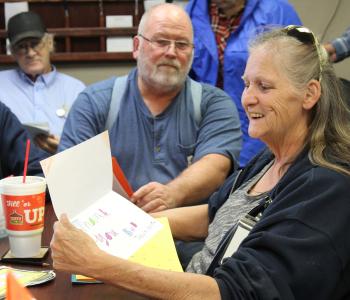 Every year Kansas bus drivers transport more than 218,000 children to and from schools.

In recognition of the dedication of those men and women, Chanute Elementary School children wrote thank you cards that were delivered this week along with boxes of donuts to the School Operations Center where the USD 413 bus drivers gather every morning and afternoon before heading out on their routes. 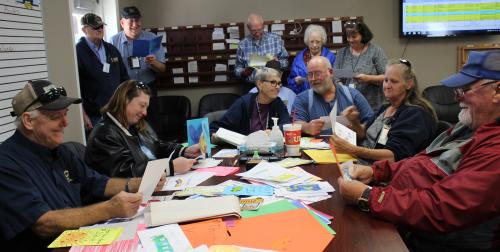 Their effort coincides with School Transportation Appreciation Day on Wednesday, Oct. 23, and in the middle of National School Bus Safety Week

School bus and van drivers, dispatchers, mechanics, riders, directors and other transportation support personnel perform a valuable service across Kansas communities and along state highways. Parents and community members entrust the safety of their children to the men and women who give their time and talent to make sure students get to school and home as well as all their afterschool activities and sporting events.

Every Kansas driver also plays a role in making sure that students get to school and home safely.

It is critical for drivers to be vigilant when school buses are in the vicinity and to obey the law which requires motorists to stop when approaching a stopped school bus. According to a statewide count day in April, bus drivers reported 1,040 stop arm violations.

“School buses remain very safe, but we know that student passengers are most vulnerable when they are outside the bus, so please obey the stop arm law,” said Keith Dreiling, director of KSDE’s School Bus Safety Unit.

Violators of the law endanger children and are subject to fines and court costs in excess of $420.

So, when drivers see the red flashing lights of a school bus, Dreiling advises drivers that it’s time to “Stop on Red, Kids Ahead. “